A compendium of the vile Monstrum species and their depraved behaviors. Within lies the sum of scientific knowledge of these fascinating, rapacious creatures, and the mortal and carnal threats they present. Fearlessly do men oppose them through sweat and steel, and for them awaits a clean death, but for the little girls, the mages who wield the powers of the cosmos, an altogether different fate awaits when they fall in battle.

The volume that you hold in your hands, dear mage, represents the compiled work of countless scholars and researchers. This edition has been enhanced with additional diagrams depicting genital anatomy, corrected measurements of average ejaculate levels, gestational progression for new species, and further illustrations of these beasts engaged in coitus with other mages like yourself who were too weak to prevail in combat. Study them well, little girl, lest you find yourself beaten, your staff torn from your hands, your magic fled, your clothes torn asunder and your body violated and stretched to its breaking point by the massive cocks of these foul beasts of perdition. 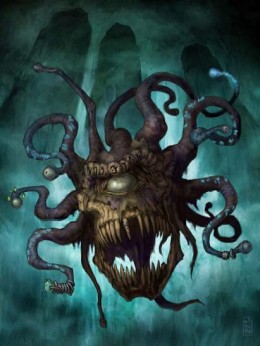